Not so the first time, a midday shower at Abbeycwmhir changed the nature of the track, the racing, the mood and general feeling of the meeting. It has happened before, honest . An easy day out on a recently restored bike on a really nice track changed into an event for the committed (foolhardy) to take their beloved machine into a very damp muddy field. 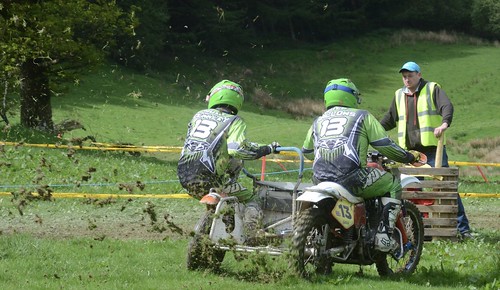 One of the questions remain is why ? Why do people still want to take their bike out when it’s really muddy when you know :

True, that to some extent, spectators really love it, more for the amusement factor than watching exciting racing. This is especially true for the sidecars. It’s not really the case that poor conditions are more dangerous, as there is less racing as such and speeds tend to be slower.

You can get lodged under the bike (as Ian Hall found on Sunday) or just slip off in a muddy heap through exhaustion. You can’t usually see anything until you throw your goggles off (no tear off’s I hope).  If the bike stops it is guaranteed to not start or at least take 3 to 4 times the effort needed to make the bugger start than it usually does in the paddock.

So why do some people still find their way to the line, even it’s just a slog round ? They’ll be the purists who say that this is what scrambles (not classic motocross is about)

A lot of the BBC Scrambles in the 60’s were muddy, but they ran them in the winter for TV, so no surprise. The incentive of fame and glory, as well as prize money were all good incentives. That said, with the lure of Welsh Championship points in 2015, a few riders braved the very muddy track at Llanfair Caerienon just to get ahead in the race for a trophy.

Some riders do prefer slower, muddy tracks and will perform well on them.  They are the ones praying for rain on the drive to the venue on a Sunday morning. Even for the British Championship events on the day, the second, wet and muddy races, had a significantly reduced line-up.

In all in all, it does mean, that whatever the weather, you can have good racing, though the majority have a strong preference for a dry track. Then again, they don’t want it too dusty.

For the team at Abbeycwmhir, it was a mixed day. Paul Prosser chose not ride as it wasn’t a Welsh round, whilst Kevin took three bikes but in the end only used his recently acquired pre74 Can Am. It went well, though by the end it seems it might need the base gasket replacing.  For Karl Stevens, at his 3rd ever event it seems that he may be related to St Swithan, given his first meeting was the Border event last year. On the 1975 Husqvarna he’d gone well at Pontrilas in April but struggled with the difficult conditions post rain at Abbeycwmhir.

I took out both the 1970 Hallman framed 250 and the 360 Automatic Husqvarna’s, both of which seemed to go well. The 250 didn’t shear a woodruff key, like on its other two outings, which was good. The 360 ran okay after the engine rebuild by Jef Bens, though Kevin pointed out after a test spin the front end was a bit off-cock.

Good to see Ian Hall back after his stroke and though he spent 10 minutes under his bike waiting for rescue, seems to have come through it fine and is ready for the next event (now Devon this weekend), as the Border event is cancelled.

Kris Winder, after winning the first British pre74 race exploded the engine on the Elsinore in pretty dramatic fashion and John Cash took a bit a lob in the same race. It’s only round 2 for the season so a lot of time to get the points back.

With nearly 140 solos and 15+ sidecars it was a really good turn out and shame it was spoilt by an hour burst of rain. It is a great venue for riders and spectators and it will be the Welsh Championship round there in July, with hopefully better weather.