When you get back home and your worst place finish was 5th, that it didn’t rain and that the only tool taken out of the toolbox all day was the funnel, you know you’ve had a good day racing. Since his last trip out to Abbeycwmhir, Karl had bought a Suzuki TM250 for the pre74 class and a quick preview on the Saturday up the lane in Bwlch chasing a cat showed that it sounded good and seemed to go well.  I’d been busy and had no shed time on the Husqvarnas, so it was a quick fix and clean to both bikes before putting them in to the van.  A quiet evening watching Germany and Italy taking bad penalties and off to bed, for an early 06h30 start.

Neither Dai (broken bike) nor Paul (broken bike) were riding though in their roles on knowledgeable sages and holders of spanners they fancied the trip to Chester. Luckily we managed to split them up in the two vans as even the individual excitement on spotting some classic tractors near Newtown was pretty extreme. Speedy journey up the A483 without horseboxes and though I forgot to get some petrol (as concerned I’d double mixed the fuel, 17:1 not such a good ratio).. Paddock looked in good shape, though there was some evidence of the carnage from the flooding during the 100-miler event a couple of weeks before.

[All photos courtesy of Eric Miles] 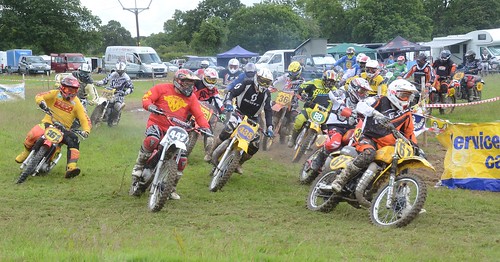 Start of the Twinshock / Pre78 race. The Weavers start to move into formation.

Coming up North so to speak means you get a different set of people and bikes in the paddock,  including an Automatic Husqvarna, a AJS Stormer, a CanAm (not from Tredegar) and a plethora of Bultacos, that seem to be lost from down south.

Practice went away on time and pretty smoothly, with the track altered slightly from the ruts and bumps of the 100 miler course from earlier in June. No sidecars until Septembers meting either, so the berms and ruts on the track could stay in place (I like sidecars, honestly). 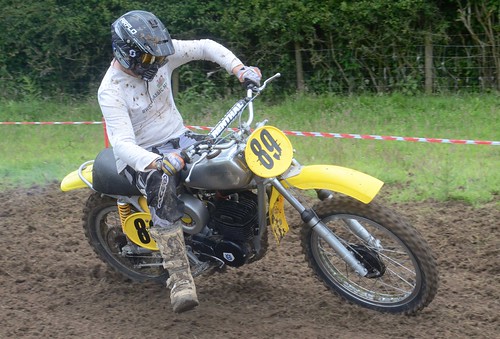 One of my better racing shots. Both bikes went well all day, but kept losing the front brake on the Hallman so need to make a few adjustments.

In the Pre60 / Pre65 Metisse races it was primarily between Andy Carter and Chris Dean during the day, with Andy continuing to show some fine form, despite the front brake on the Jawa completely disintegrating after the first race. Dismantling the Metisse meant he could continue to score points in the pre60 class, which he continues to dominate. Jon Britton, Mick Maskelyne and the smooth Peter Lockwood on the Dot all score good points towards the championship. Mick is showing good form also and is ready for the Classic MX des Nations. I managed some good results and after finishing behind Mark Abbot in race 1, managed to get past him in race 2. Derek Brice picked up maximum points on the day and leads the pre65 class for the championship. Personally, couldn’t get near him and whilst he needed a spare bike for race 2 (after a puncture) it didn’t slow him down.

No doubt Phil Anslow is out to prove a point after his two DNF’s at last years Classic MXdN and not being picked for the 50+ team for this years trip to Northern Ireland. He showed some good form in the pre68 up to 350cc and two of the three races after Mitchell Harris had retired Bob Woods BSA in race 2. (Mitchell had already had the larger capacity bike fail in practice). Odgie Danaan made his annual visit to the Welsh Championship on the big-bang Honda 305cc  (as far as I’m aware an altered crank means both pistons are fired together, better grip?) and had some good rides including a 2nd.  In the two-stroke battle, I score two 5ths and a 3rd, with Andrew Davies getting ahead in the final race. Vince Hale also scored well on the day.

Phil Anslow rode the same bike in the Unlimited Pre68 class, again winning 2 out of 3 races, with Mitch Hughes getting the better of him in race 2. Some close racing here showing how difficult it was to pass on the Chester track. Though wide in some places there was really only one line. After the Classic MX Organiser let him know he was in the pre68, rather than the pre74 class, whilst it was on the line, Nathan Jones on the 4-speed 400c Husqvarna managed to ride consistently in all the races. As such he heads the championship after 3 rounds. This is most likely the half-way stage this season after the demise of the Border round in May as the scheduling will make it difficult for a rearrangement to be put in. Good to see Barrie Townend going well again after the 2015 pre65 champion had made a sluggish start to the season. 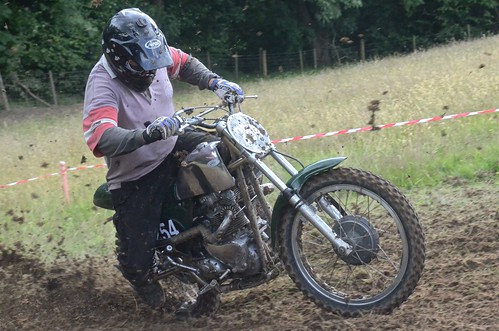 Chris Dean on the Tribsa

In the Pre74 classes it was two very different stories. With no Kris Winder, who won everything at Blencarn the previous week, it was Ben Weaver’s turn to dominate on a Honda Elsinore.  Showing some excellent style it was three easy wins over fellow Elsinore riders Simon and Chris Carter. However performance of the day came from 17 year old William Guest who’s 2nd in the final race showed the massive improvement he’d made over the year when he rode his first meeting at Chester last year. He missed a gear on the penultimate corner but manage to keep the Carters at bay for a fine result.  Karl Stevens (797) had bought his own bike, a TM250 and it was good to see him engaged him in lower order battles around the track. Always great when you find someone to race with.

John Cash took maximum points from the Pre74 over 250cc class, but only after some major battles with both Brian Littler and Jonathan Randall, who took a spill whilst challenging strongly in race 2.  Ian Fenwick had bike problems in race 3, but still managed to pick up enough points to keep him 3rd in the Championship standings. John Cash showed a fine riding style all day and things looked pretty smooth out at the front. 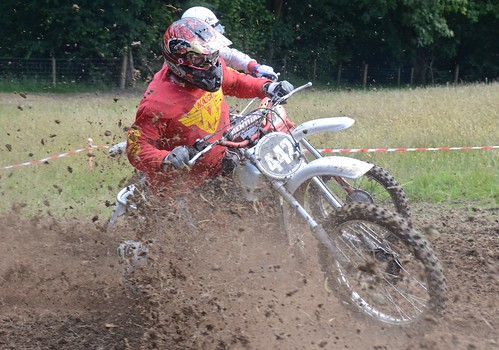 Great photo of David Weaver on the Maico

A good line up for the pre78 / Twinshock race. With Paul Prossers Cagiva broken and Alan Woods knee not fit enough to allow him to ride, it was David Weaver v James Edge in the pre78 class. Though he tired in the last race (some training ?), David managed to pick up 42 points against the 39 scored by James.

The Twinshock series this year has some renewed vigour and the Maico mounted Nobles from Cardigan are having an impact. Kyle continued to lead the championship after winning two races (not sure what happened in race 2, but I was in between my two races per block) with Keelan in his first full season riding consistently after blowing a head gasket. The paddocks was a hive of Maico activity all afternoon. Anthony Guest has moved from a Honda CR480 to a RM400 Suzuki and after getting two seconds, faded in race 3. He stays second in the championship behind Kyle. Standout performance was John Tilson’s 2nd in the 3rd race, his best result for a while.

The track rode well all day and though rough in places it was a pleasure to ride. From both direct experience when racing and from watching other races it wasn’t the easiest place to pass and the start was really important. Get that right and you stood a chance. My missing gears in the 3rd pre68 race meant I was behind Andrew Davies and then really struggled to get past him. There were some over taking places but you had to judge it right.

My own performances this seasons show I’m getting the hang of the RH change on the 4-speed Huskies and just need some more track time. Abbeycwmhir up next and whilst a great track, it’s not the best place for an underpowered two-stroke against the behemoths of 600+ cc British 4-strokes. Shall see how it goes.

Went to look at a bike at Ted Evans’ on the way back south; Ted’s driving (Suzuki Vitara, with bike rack and caravan) is certainly more adventurous than it is with the CZ on the track and the visions of a weaving, overtaking caravan will stay me for a while. Paul and Dai spent the time drooling over the old tractors in the shed, which is a troubling development. Maybe some other form of event (often seen in Russia and Poland) might be more appropriate for them ?

The visit to Ted’s was a memorable end to a great days racing. Classic MX at its best.

The full results from Chester can be found on the 2016 results spreadsheet.