….hold a scramble at Abbeycwmhir. After three weeks of nice weather we were due to have some rain and so it did at Abbeycwmhir. It rained on and off all day, but never heavy enough to get the mudfest from May and an impossible track. It’s a shame as a good entry, a well laid out track and one of the best locations in the country for Classic MX were all set up for a great days racing.  Karl Stevens (along with Katja)  had travel up with myself and Paul from Bwlch, after a pleasant and entertaining barbeque the previous evening.  Paul’s heartbreak over the tank from his Cagiva continues and so he’d didn’t ride, with Dai Walker also not riding as he was detained by bailing and awaiting a new engine for his BSA.

First race of the day. Guto’ getting stuck on the gate didn’t stop him winning the race from last on the Peter Lockwood Matchless

The paddock looked decidedly quieter than it did in May, though with 91 entries, it wasn’t too quiet. Perhaps it was better parking or less of the massive campers from the British Championship travelling contingent. Some alterations to the track and relatively narrow in places as it weaved between the reeds and boggy ground across the hillside. The adverse camber corners were there, which are fun wet or dry. It’s a track I struggle on with the 250 as you need easily available power to get out of the corners and up the hills (and probably a better rider)

My own day started badly but got better, but finished with a tinge of disappointment (a bit like dancing with your mates to ‘Come on Eileen’ and then being left dancing with the “girl you fancied” best friend to  Spandau Ballet’s ‘True’ during the erection section at the end of the night). One thing that does need to change are the Michelin M12’s on the Bolt-Up. Whilst they are the mud and grass tyre, compared with the hard pack S12’s. However, S12’s are the one’s to have it seems and the difference in grip on the rear between the bikes was significant. That said, the longer framed Bolt-Up doesn’t seem to grip so well.

Plenty of themes during the meeting apart from the weather, including Paul Prossers continuing quest to find the elusive holy grail that is the team for the Classic MX des Nations. That this quest involves finding riders of the right age, who have a bike of the right age, which is of the right capacity and stroke, who are willing to travel to Northern Ireland and who don’t get upset when they initially don’t get picked and refuse to come when they are asked later.  A thankless task akin to that undertaken by Sir Lancelot, without the adultery of course.   However with the submission of teams due by August 15th still time for some further selections. 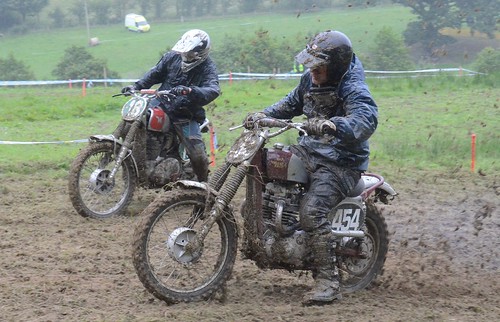 Guto Llewellyn and Pete Hollinshead battle it out

In the Pre60/Pre65/Metisse races, there was healthy line-up with Pete Hollinshead making his second appearance of the season and probably expecting his usual 3 wins out of 3 on his pre60 machine.  It had been pointed out to Pete and Andy Carter that they might have a bit of challenge on the day as Guto Llewellyn had been united with a reliable bike, in the form of Peter Lockwood’s might Matchless in preparation for the Classic MX des Nations. The Matchless has been used for a few visits by Mick Andrews to the Bonanza see [1] below and as well as being a powerful beast it’s been well set. When it was pointed out that Guto would be challenging Pete, Andy mentioned that he’d need to get past him. After getting stuck in the gate on the first rate, Guto went past Andy, and everyone else in the field to show that on a big bike that lasts more than a lap, Guto is a force to be reckoned with, with a style that will be well suited to Ballyblack.  My own race ended on lap one, with a frayed throttle cable jamming the carb open and putting me on the deck. Kill switches are pointless on stuck open throttles as I’ve noticed in the past.

As I was back at the van in the paddock changing the throttle cable, whilst my toolbox filling up with rain water, I didn’t seen much of the first block of racing.  In the pre74 up to 250cc, Ben Weaver’s search for a decent competitor if Kris Winder isn’t riding continues. He won all three moto’s but outstanding ride on the day goes to Kevin Petitt on the Can Am which he’d picked up from Simon Reilly earlier in the year. It uses the disk vale Rotax engine (the same as SWM trials bikes) and even though it has an enduro disk, they are serious quick out of the box, not requiring the serious mods required for Elsimores or pre74 Yamahas. Kevin grabbed a second and two 3rd’s, whilst William Guest continued to have a great season on the CZ. Gary Wolstenholme has also shown some form this season and along with Chris Lewis (also Honda) and Sam Gittoes (CZ), was well ahead of the rest of the field. The pre74 250 class is the best place for newcomers and older riders a like and it was good to seem some battles down the field, with Karl ‘Savlon’ Stevens having a good day out on his Suzuki TM250 despite the conditions.  Dominic Wall was also back after injury ended his season early last year. 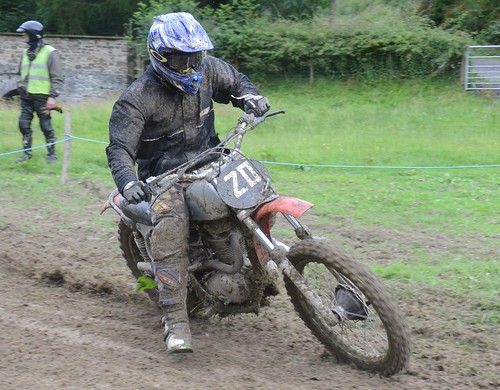 It was great to see pre78 series sponsor Alan Woods back after his early season injury and he was back on the pace for the first two races before engaging in a 50m slide into the first corner in the last race. More John Curry than Bob Hannah, it showed the power of the rear brake on the YZ125. No further damage done and he’ll be back for Teifiside. It was good to see the pre78’s have their own race and David Weaver’s horsepower (400 ish Maico) against James Edge’s 125cc Suzuki meant he edged it on the day, but it provided some great racing.  After numerous rants and workshop woes on Facebook Lee ‘Fallguy’ Johnson got 3 finishes and is now pushing for championship recognition. As well as actually racing this might involve not giving Alan a lift to meetings and ensuring David Goddard is suitably distracted.

Classic MX des Nations hero (after pushing his bike over the line at Mortimer) Rob Jones won all 3 pre68 unlimited races from the advanced pit position ahead of Phil Anslow and Mitchell Harris. Nathan Jones on the 400 Husqvarna scored well again and continues to lead the championship [2].   The pre74 over 250cc battle between John Cash and Jonathan Randall continues, with John getting the first two races ahead of Jonathan and the out-of-class Ben Weaver (looking for some competition). However a loose rear axle nut and the resulting lock-up meant that Jonathan collected more points on the day to keep the championship alive with two rounds to go.  The ‘Ian’s’ Fenwick and Hall both had consistent and good riders given the conditions and along with Sam Gittoes picked up some good points in what was the smallest pre74 field of the season.

By contrast, the pre68 350cc lineup was unusually healthy made up of both regulars and visitors. Rob Jones raced out of class and won all three races, and after winning race 1 Doug Sherbourne retired (not sure why) leaving Mitchell Harris to pick up the most points. Championship leader Phil Anslow also scored well, proving it was just the right motivation that was needed to have a blistering season. Geoff Taylor has acquired a ECMO eligible Twinport CZ and after a couple of experimental run-outs so far this season seems to have got the hang of it and got the points ahead of Vince Hale and Malcolm Herbert. 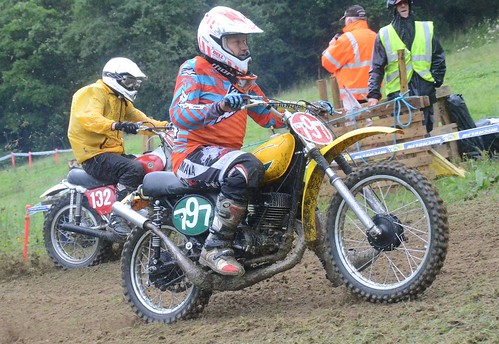 Andy Lane and Karl Stevens in the pre74 250cc class

I’ve not got the sidecar results, and didn’t watch any of the racing (due to fixing bikes). However, from my location in the paddock I could see Adam Longmore struggling with his outfit’s performance. In a move to extract more power from the Yamaha XT600 engine recently scavanged from the scrappers he’d decided to increase the fuelling by doing without a pilot jet in the carb.  Meanwhile, racing continued and I do know the Chell’s won the first two races. I did watch them cleaning the chain between races. The little details obviously count.

A healthy Twinshock class was dominated by Steve Adams and other Devon visitors (who’d forgone the Dorset meeting also running on the weekend). It was good to see Rhys Edwards taking top points on his first outing on the Maico and Yamaha collection. Series leader Kyle Noble didn’t have a good start losing out to Anthony Guest, but Anthony had issues in race 2 himself. Sam Weaver scored good points despite his best efforts not to actually use his main Maico machine all season. He also scored top points for the loudest bike when his exhaust broke,

Despite the weather, some really great racing, which entertained the relatively small crowd. Steve Goode’s commentary was excellent and many thanks to the Mid Wales club. Much appreciated by all the riders.

Nearly forgot, after a DNF in Race 1 in the pre65’s, managed three finishes on the Hallman Husky in the pre68. In the last pre65 race, I’d kept ahead of Mark Abbot, until a wire dropped off the HT coil in the last corner. Bummer but could have been worse. After a hassle free event at Chester, it was more of a challenge to do 6 races.

For the results see the Google Sheet

[1] This is the Adrian Moss event, with the most complex regs for any event in the AMCA calendar, rather than the 1960’s TV Western.