Whilst the daughter’s were enjoying the Insomnia gaming festival I managed a trip to Ikea in Coventry (as part of a current petit barn conversion) and a long overdue trip to the National Motorcycle Musuem (NMM) across the M42 from the NEC.

Last time I was here was at a conference whilst still working for Becta in 1999. Becta as a government quango is no more and same goes for the majority of the motorcycle manufacturers in the NMM. From Scott to Norman and Villiers to DMW most have passed though the branding is strong and some, like Triumph have grown again.

The NMM was nearly no more in 2003 after a fire which destroyed some of the bikes and part of the building and at the time I thought it might be a good thing as the whole place had the feeling and decor of a venue once frequented by Jasper Carrot [1] or Bernard Manning.  Brown walls and carpets and lined up exhibits are what the 1970s musuem experience was like based on a memory I had with Reading Town Musuem. The rebuild might to have looked to carry out a bit of an update, but somehow they’ve kept the ambiance that was there before, made up of low key atmosphere, workshop smell and general underwhelming initial impression. 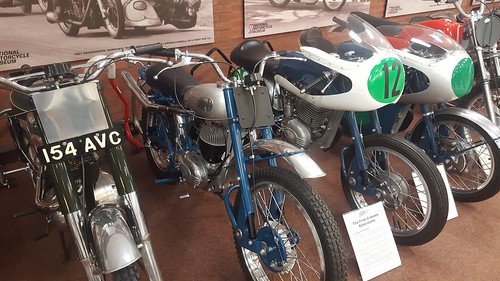 When you’ve got 1000 bikes in the collection, the obvious thing to do is to line them up in date and manufacturer order across 5 halls; this is what they’ve done. Whilst the visitor with some bike experience and knowledge of the history of the British bike industry will get a lot from the well restored and presented exhibits, you can get a bit overwhelmed with the subtle differences between a  1956 and 1957 BSA model.  There are some great photos, of bikes and riders but the floor mounted descriptions of the bike aren’t easy to read and are a bit wordy.

What the NMM achieves is capturing the past glories of the British motorcycle industry that dominated the world market even in the 60’s but somehow, in some way lost the plot in a market being eroded by cheap car ownership, overseas competition from Europe and the Far East and a general complacency and inefficiency in the industry.  Every company, market or industry should look at this demise and understand how domination can easily become destitution.  Have just ordered an interesting book on the subject. 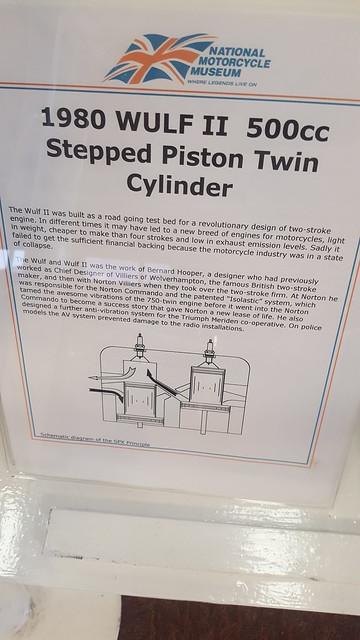 You learn something new everyday and the Stepped Piston was that something today.  Bernard Hooper still has the patents and though the website is designed circa 1998, the piston design is an interesting one which makes for more efficient two-strokes with less emissions.

Managed a quick tour in an hour before adjourning for a tea and a scone to the upstairs restaurant and start on the very nice outside terrace. Actually open 08h30 -> 17h00, it’s a good place to stop if you are travelling up or down the M42 as it has a nice ambience.   Sitting on the terrace with one eye on the incoming storm, I also contemplated that the number of oily trays and display stands were indeed indicative of British bikes and their perceived mechanical troubles and that this was also a factor. You could pay good money for the Rolls Royce of bikes, the Brough Superior but a lot of the cheap workmanlike bikes were not that well built and not as well built as European scooters or your 125 Japanese machine. 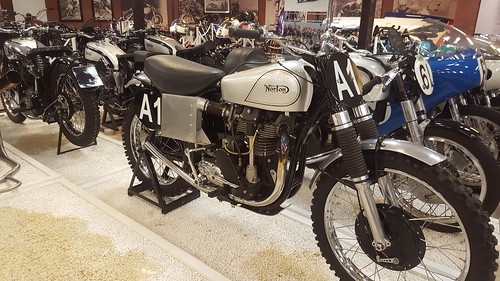 Les Archer 500T Norton Trials. Liked the look of this.

The last few years has seen the rise and rise of the retro bike and there is no doubt some of the machines are style icons. Whilst its also easy to lump British bikes into single cylinder BSA’s that leaked oil everywhere, there was significant diversity, from the Villiers engined bikes like Norman’s through the liquid cooled Scott’s. (see the model history, to understand how a 1908 bike was still being made in the 1970’s). 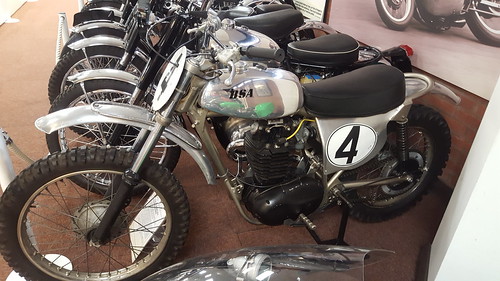 Jeff Smith’s last works BSA, a follow on from the titanium project of 1966. Lots of trick bits on this an and interesting 20″ front wheel.

Overall, I would say that the museum is well work a visit, but you’ve got to be interested in motorbikes before you go and probably not best to drag along someone who isn’t. You could really do a lot more with the history and stories and Hall 5 with the sporting bikes is the best and you could build on that.  Some displays and thought could be put into the main motorcycle sports, like the Isle of Man TT, circuit racing, scrambles, trials and speedway and include some stories and interesting fact. To some extent, the museum is too full of bikes and it was the sporting events and success in them that to large extent made the companies successful.