I’d never ridden at Hanbury for some reason and in my 7th season of racing I’d not managed to get to the track near Droitwich, until now. After some tuning of both the bolt-up and Hallmann Husky’s after frustrating day’s at Teifiside and Abbeycwmhir, I was hoping for a test run or two and maybe some good racing. Picked Paul up at 7am and headed up the A40 again after the National Motorcycle Museum visit the previous day. it rained all the way up to Monmouth and of course stopped as we headed over to the border into Herefordshire. Much brighter weather then ensued and arrived at the track just after 08h30, in a large field below the main track.

Efficiency with signing on and picking up the transponders from Track Times, who have increased the presence at Classic MX events significantly over the last couple of years. Dai Walker on the recently re-engined BSA was on the preparation trail before the Classic MX des Nations and made the trip up with John, who is useful to have a long with the spanners.  Unlike Teifiside, felt pretty chilled, not too much pressure and looking for a nice days racing.

The track is known for the hills, off-cambers and the long start-finish straight and it lived up to expectations. Practice was also slippery and touching the rear brake on the Bolt-Up had me off on the first off camber corners. Good to know it wasn’t just me as others also came off, but struggled to get on the pace though was bit better when I went out on the Hallman for the final practice session after the sidecars. The Bolt-Up was running and revving high after the 3rd pass down the long straight. Still trying to get it to run cleanly though it’s starting is better. It wasn’t the idle adjustment, which I adjusted by the track (and then lost) and the cable wasn’t sticking. No joy in sorting this out and seems like a leaking crankseal or air getting in somewhere on the bike. Further research to be done.

First race in the pre68 up to 350cc went okay and the track was bedding in a bit, with some of the grass coming off the top of pretty firm soil. Lines were appearing on the corners and its a tricky track than needs to be learnt. Good battle with Andrew Davies and he got past me on lap 4 and I think we were 8th or 9th respectively in what was a pretty healthy line-up. Parked the bike up next to the pit box and walked over to find John and Paul before watching Dai out in the next race on the BSA.  They’d walked up to watch practice earlier and the second walk up the hill up from the paddock had resulted in more cups of tea and a thought of adjourning to the nearby pub and watching the racing from a distance. No complaints from me as managed to get some cups of tea, cake and even an ice cream later on. All very pleasant as the sun broke though and watching the racing with an excellent crowd. Not so pleasant was the rain shower that came before the first pre74 over 250cc race and the subsequent coming together between John Cash and Wayne Partington on the first lap. Both riders went down and whilst John as just shaken, Wayne ended up leaving in the ambulance with a dislocated shoulder and suspected broken collar bone.  Plenty of concern from the other riders, marshals and spectators, whilst Paul ‘Welsh Team Captain’ Prosser was thinking on running over to see if 1/4 of his 30+ team was still intact and inflicting a kiss of life if needed. Also, potential not so good for Wayne and his England ride, as was the fact the ambulance broke down on the way to the hospital.

The sidecar boys and girls, feeling left out as the normal banker for a race stoppage managed a red flag on their own as it all got a bit too keen after the start of the race and destroyed a large section of the track. These delays meant the Jeff Smith Trophy race was shelved and interval being taken. Rain had now stopped and we adjourned to the paddock and caught some sun and a nice chilled out and relaxed atmosphere. Happy with my first race, I was looking forward to more.

I missed a gear off the start and lost 4 or 5 places as result, but went much better on the bike and some of the confidence from Narberth was back and ended up with another battle with Andrew Davies, which I lost again on the final lap. Front brake adjuster had moved again, so took the bike back to paddock and did some quick fixes before heading up for the pre74 up to 250cc race. Had a good battle with Derek Brice on his Bultaco (more Classic MX des Nations prep)  who I got past on lap 3, but who got back past me whilst I slowed down under a yellow flag  (my opinion) as one of the Elsinore contingent crashed through the tape. Good racing and what was now an excellent track.

Parked the bike up again and Paul came over with a bottle of water and we sat on the grass watching some good racing, including the sidecars and the 2nd British Championship race (won easily by Tim Dallaway).  Alas, in the last pre68 race, I acquired another puncture which it was more than an isolated incident at Teifiside. Rather than trying to fix, decided after 4 races, that enough was enough and I’d park the bike up. Had a chat with a few people in the paddock and then after a 10 minute deliberation on what pub we’d go to, we eventually decided on the one who’s car park you needed to drive through to leave the track. Along with Jon and Reuben, the four of us sat in the sun and watched the end of the racing from afar. Very pleasant. 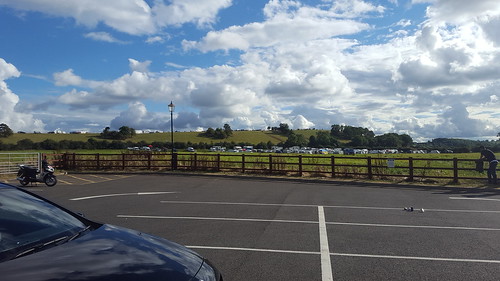 View of the paddock and the track from the adjacent pub car park. 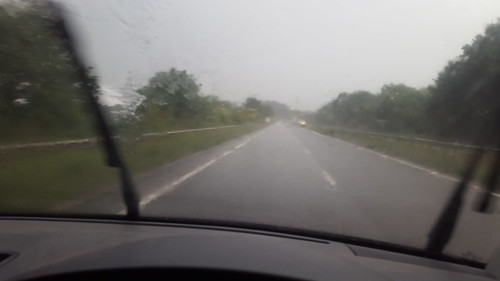 And the rain returned as we headed back into Wales 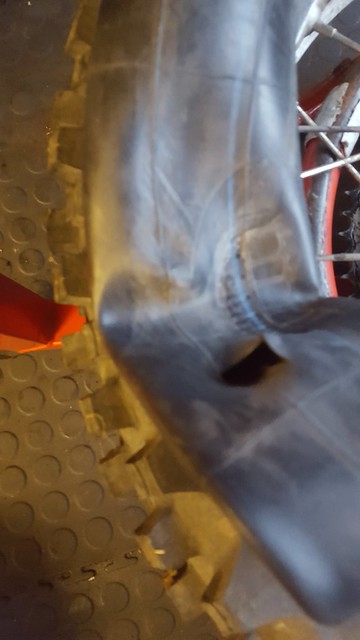 More that a normal puncture. The tube had ripped, probably as a result of a couple of loose spokes,

Great event and well organised by the Moseley club. Will be back next year !