Overall the entries for the Classic MX des Nations were down on previous years, probably due to the location in Northern Ireland, would meant high travel costs and a long journey for the continental teams. There was no team from Belgium and only 1 team from the Czech Republic.  The only number of teams for the 30+ meant that both England and Wales were allowed to enter second teams, something usually only the host country can do for Wales it allowed some of the people already committed to travel as reserves and helpers to get a ride at one of the premier motocross events.

Having two teams in one race can mean some thought needs to go into planning, as you don’t want the ‘B’ team as such taking points away from the A team. With Andy Stanton coming in as a last minute replacement for Paul Prosser, who rightly decided that being Team Captain was going to take a lot of his time on the day, we had a quick rider who was going to mix it with the A team, but plenty of discussion beforehand meant that there was a plan for ensuring the A team got the focus for the event. On paper the England second team was as quick as its first team so would need team orders potentially to ensure the best results.

The 50+ class was the premier event, with 11 teams on the start and this would be the choice event on race day. As a Welsh team, Paul Prosser had done a great job in getting a team in each class, with the 70+ team now guaranteed a trophy, as the German team had pulled out at the last minute. The sure thing in other classes was with the very impressive, BSA-mounted French team in the 60+ class who’d looked really good in Mortimer last year. However you’d suspect the England would do badly not to finish on the podium in each race. 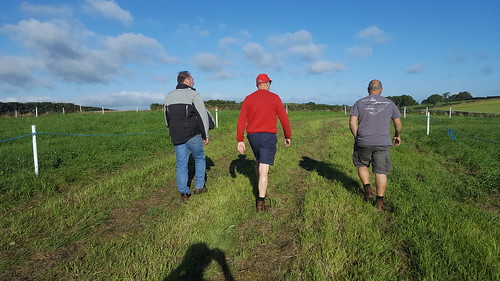 Walking the track; it was a long way round

The day before race day can be a long and somewhat fraught one with plenty of organisational issues along the lines of “cat herding”.  After a relatively quiet night, got to the track for 08h30 and after putting up the pop-up in the sunny, but slightly chilly morning it was time to walk the track. Some feedback from other people in the Welsh team that this really was a long track (2 miles), I set my running/cycling GPS watch and we set off.  You could have been in Devon, with wide corners and grass on the circuit, something the continental riders rarely see. Alberto from ECMO mentioned a few times how good it was to see a track like this, and though there had been some complaints it was something very different for many riders. 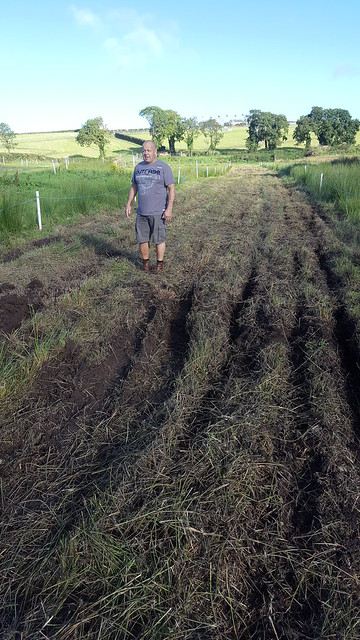 The boggy section which was cut out for race day.

The back straight was of Hanbury proportions, but with two jumps en route, the second of which would provide some significant air time for the quicker riders. The main discussion point was on a 150m boggy section at the back of the track, which because of the surrounding reed beds made it feel very much like Abbeycwmhir. The discussion with teams, organiser John Colling and the Clerk of the Course would mean the most of this would be taken out before practice.  The GPS showed the track at just under 2km in length, slightly less once the boggy section was removed.

Back in the paddock, Paul got down to finding riders, sorting race shirts and numbers and checking that everyone was aware of with what needed to be done.  With the ECMO meeting and the preparation for racing tomorrow not really starting to 14h30, along with Kevin and Graham headed off to do some shopping and find some lunch.

The ECMO meeting was relatively short and had some interesting notes, in particular on the European CEC rounds for 2017 and that the Classic des Nations will be in the Czech Republic in 2018. Also, the draw was made for starting positions (as there is no timed practice for the Des Nations) and where it mattered, Paul drew some good slots for the teams, especially with slot 2 for the 50+ class. Wales avoided being the on the jury this year, after being selected at Mortimer the previous year. 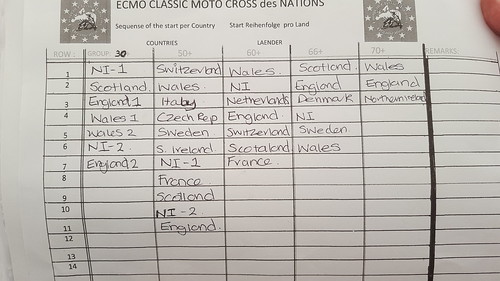 Start slots as drawn by the country managers

After the entry fee was paid it was time for scruitineering. Safety checks for bikes were done by the club, with the 4 countries of the jury keeping an eye out for eligibilty. Whilst the ECMO rules are clear and relatively tight watching the time of bikes come through it was clear that some pushing of boundaries had taken place in many sheds and workshops across Europe. No real checks on suspension travel were made (and it was clear that some had more than the maximum front and rear) and that some bikes were out of age range. Whilst as a Welsh team we had two bikes we were aware of that were open to interpretation, having a 1974 Maico for the pre70 class was pushing it a bit. Some of the Husky’s were pushing it a bit, with mid-80’s twin leading shoe front brakes in one case. Potentially something for ECMO to think about in future, especially with the change to pre74 for the 30+ and 50+ for next season.

The riders then signed on and it was time for food and a trip to the excellent beer tent / main marquee as the evening settled in and thoughts turned to race day. 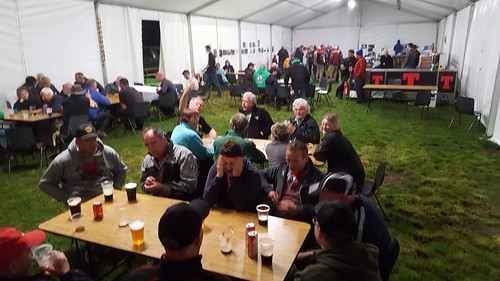 Friday night beer tent with Welsh team strategy being actively discussed. Scots and Irish also present with the England team under instruction for an early night. Winning is everything.