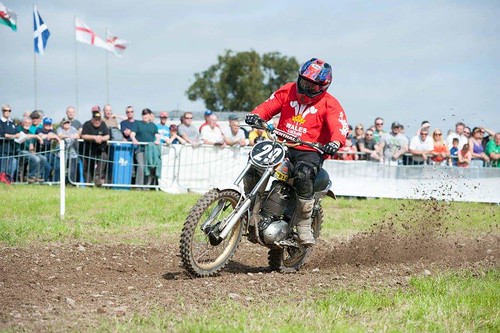 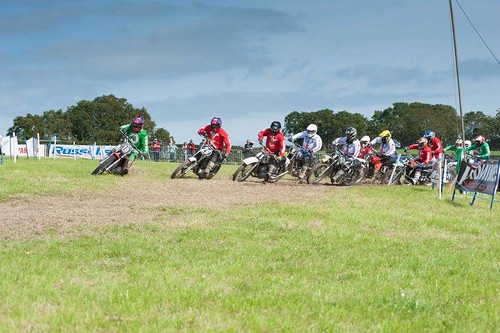 30+ Race 1 start, looking good for Wales, before the 2nd corner collision between Guto and Andy Stanton

Early start for the team at the cottage, with first practice due at 8h15 for the 30+ team. The sun was out and the wind had dropped and a fine day beckoned as we headed over to the track at 07h15. The race day programme is pretty full and long, with the final race not scheduled for 17h30. Each class getting 2 sessions of practice before the team presentations at 12h00 and racing from 13h30.

The scoring for the classes is based on race position, with the lowest total winning. With 4 riders per team and 2 races, the score is taken from the best 6 of 8, where a DNF is scored as 50.  Obviously its important to avoid them and getting the best result can take a little bit of team tactics and planning.  The track at Ballyblack was a long 1.8km / 1.1 mile lap, and would be familiar type to the UK riders. Generally fast with some jumps, which not large gave plenty of air time. Whilst there were some soft patches overall the base of the track was firm and held up pretty well all day. The start was wide and would allow for 40 riders directly on to the gate, so a double line would only be needed for the 50+ race.

For the specific rules, teams and riders the ECMO site, http://www.classicmotorsport.org has all the details.  Race position and timings are available on the Mylaps Speedhive page.  For the race report and results, I’ve split it by class.

With both a Wales-1 and Wales-2 team running in the event some planning was needed, especially as Andy Stanton in the Wales 2 team would be quick. Some discussion prior to racing on how to handle any conflicts over what might be valuable points. 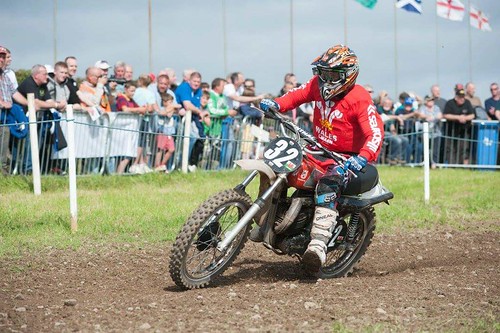 Andrew Owen on the 250cc Bolt Up Husqvarna

Practice for the 30+ teams went to plan, well almost. Kevin had some fueling problems with the 450 Husky as a result from some crap in the tank. My exhaust cracked and lost a tail pipe in 2nd practice. Thanks for Cecil Pearson’s welder and Pete Hollinshead’s welding skills, it was repaired in 30 minutes so plenty of time before racing.
Race 1 went well for the first 15 seconds, until Guto’s lack of a front brake took out himself and Andy Stanton in the first corner.  A quick restart from Andy saw him get back in to the field quickly. Guto was a bit more off the pace and came off again as he battled to get up the field. After an excellent start, Andrew Owen on the 250cc Husky rode well to keep 16th position. Rob Jones battled hard to take 3rd overall.  The team was in joint 3rd with the England-2 team, behind England-1 and Northern Ireland-1.
For the Wales-2 team is was mixed. Andy Stanton’s 7th was outstanding, but my Husky seized solid on the back straight on lap 6 and Kevin was struggling after an off on the first lap where he’d injured his leg. Jon Britton rode consistently to finish, but the team ended up with two DNF’s.  Based on the estimated scores the team was therefore in 7th and last place.
For Race 2, the track had held up well and the start didn’t involve a massive pile up of riders. Another brilliant ride got Rob Jones into 6th, with John Cash not far behind. Guto was down on power on the fast circuit on the Peter Lockwood Matchless but got a valuable 13th place. Andrew Owen had an off on the last lap, but still made 18th.   For Wales-2, Andy Stanton got into 6th, 20 seconds ahead of John Cash, though luckily the loss of a point for Wales-1 didn’t make a difference and they got 2nd place behind England-1 and ahead of Northern Ireland-1. With Malcolm Herbert in 20th, Jon Britton in 21st and Kevin Pettit (with leg injury) in 25th, it was all 4 finishing and therefore the two DNF’s from race 1 could be dropped, and they ended up 5th, ahead of Scotland and Northern Ireland-2.
A great result for Wales-1, especially as the England-2 team looked as strong as their first team on paper. The first ever trophy for Wales at the Classic MXdN, but there was more to come.
50+ / Pre70 Machines.
The Welsh team was made up of Pete Hollinshead, Andy Carter, Dai Walker and Derek Brice. Pete was mounted on his unfashionable A10 and was looking to continue the form he showed in Mortimer the previous year and hold off the massed ranks of CZ machinery. Andy Carter had swapped his normal TriBSA mount for a 380 CZ, and loaned a 250 CZ to Derek Brice. As with the 30+ class, a 250cc bike is needed by each team and this provides a real challenge for the teams. Recent form from Dai Walker on his now 440cc BSA justified his selection, but the whole team had a tough ask in what was the premier event, with 11 teams from 10 nations taking part.

Pete managed 3rd into the first corner in race 1, but the heavy BSA was a challenge round the track which had some big jumps and relatively tight turns. He ended

up 8th, with Dai Walker coming in 21st in a race that was dominated by the 3 man Northern Ireland team that finished 1st, 4th and 6th (after losing the 250cc rider with an injury during practice), with Laurance Spence taking the win ahead of Keith Best. England were in 2nd with the Czech Republic (with their only team present at this this year Classic MXdN lying ahead of Scotland.
In race 2 Pete took the holeshot and battled hard to stay in contention eventually finishing in 11th on what was a rougher track on the second 20 minute + 1 lap moto. The rest of the team performed better than in race 1, with Brian in 21, Andy Carter in 23rd and Derek Brice in 30th.  The final position of 7th overall was a little unfortunate as had they each gained 3 places over both moto’s they would have ended up 4th, ahead of Scotland.  It was a tough ask against some strong teams, but Northern Ireland’s win was a highlight of the day and the Laurence Spence v Keith Best battle in race 2 excellent to watch.
In the 60+ / Pre65 bikes  it was going to be a tough ask, and with Geoff Taylor, Dave Bevan from the 2015 event, joined by Welsh championship and Moseley club riders Alistair Fowlie and Bob Twigg, it wasn’t made easier by mechanical issues before and during the meeting. Geoff’s Twinport CZ snapped a gearshaft the week before the event and with spares not being highly available he’d travelled to Ballyblack not sure what bike he’d be riding. He ended up on Malcolm Herbert’s Husqvarna, with the gear change on the wrong side and probably not the bike preparation he was used to.  Bob Twigg’s BSA split it’s fuel tank during the first race, but as well as finishing he managed 9th in the 2nd race a strong finish given the competiton, especially from the French who has a 1,2,3 in the first race and whose score of 15 was the lowest (and best) in any class.
The 66+ class had 6 teams entered, with Sweden and Denmark competing alongside the home nations. Mick Maskelyne competed in 2015 and Peter Lockwood moved up from the 60+, whilst long-time championship support David Simpson rode for Wales this year, along with Bonanza regular Peter Yates. England, with both Phil Edwards and Doug Sherbourne looked well placed and so it proved with a 1,3,5 finish in race 1. With Denmark picking up 50 points for a DNF, Wales were lying a theorectical 3rd with Peter Yates finishing 12th and Mick in 13th.   Race 2 saw a victory for the Swedish rider Jorgen Ahlstrom after a poor start from Doug Sherbourne, but David Simpson started well and got home in 13th place, 1 ahead from Peter who had another consistent ride.  Mick misjudged the fuel needed for the race and stopped on the last lap. Though some there was conjecture at trackside that this may have cost Wales 3rd place, this was not the case as the top 3 of England, Denmark and Sweden were well ahead of Wales with a margin of 48 points.  Wales did come ahead of Scotlad and Northern Ireland.
Wales didn’t have a 70+ team for 2015, but Team Manager Paul Prosser had hunted across the Principality to get a team together. With the late withdrawl of the German team (who competing against was used an incentive) Wales was guarenteed a poduim finish. Brian Walker decided not to ride on the preceeding day, so it was down to John Dunscombe (who had ridden as part of the 66+ team the previous year), Gerald Llewelyn and Corwyn Jones were left to make up the team. With 6 finishes needed the priority was avoiding a DNF. With the Llewelyn Ariel / JAP shedding a magneto in practice, it looked like a familiar pattern seen at Narberth or Teifiside. However paddock miracles were worked and both Gerald and bike finished both races, as did the steady Corwyn Jones on Dai Walkers bike, who primarily concern was preserving it for the 50+ race. However ride of the day went to John Dunscome, who after coming 2nd to Cecil Peason (the JAP Metisse guy) in race 1, went on to win race 2, and thereby becoming the first Welsh rider to win an Classic MXdN race. Superb stuff.