Once again the Llanthony meeting finished off the Welsh season, and though it was a week after a memorable MXdN meeting in Northern Ireland, it lived up to previous years. An improved track (longer than before, with some great left hand corners) and good weather, with only shower making things a bit slick during the middle of the day. It was both a British and Welsh Championship round so there was a good entry of top quality riders. The Llanthony Club had spent Saturday setting out the track which saw the return of the long hill after the start and a new section across the top of the field under the trees. 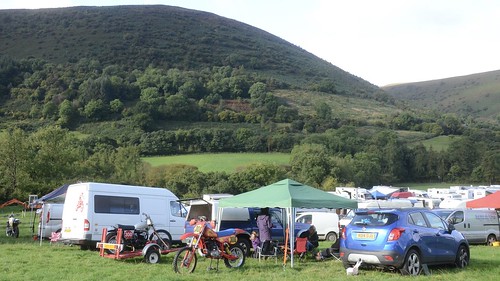 Not many better locations for racing in the UK

The pre60 and 65/Metisse classes were combined and formed a healthy line up, not including the aforementioned Andy Carter, who having already sewn up the championship was focusing on the sidecars. Pete Hollinshead took maximum points on his A10 BSA, with Jon Brittan, Mick Maskelyne and Peter Lockwood all riding well and scoring good points to finish off the championship. For the pre65 / Metisse, Derek Brice had wrapped up the title before the previous Teifiside meeting but was challenged by Dai Walker on his BSA, who after an off when past Phil Edwards in race 1, had two good races and take the overall win on the day. Malcolm Herbert had secured 2nd at Teifiside, not a bad thing since the bolt-up Husqvarna had become non-functional at Hanbury.  There were race wins for Martin Coleman, Lee Kelly (who’d stormed the field at Chester) and for Pete Hollinshead. 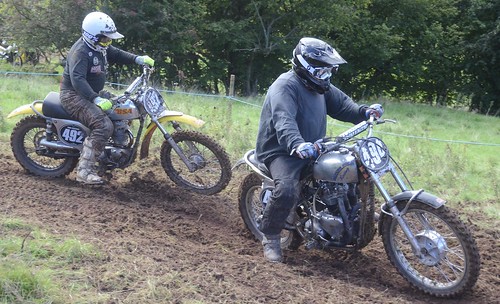 Dai Walker and Barrie Townend, good to see Barrie out on the bike

For the pre68 350cc class, which this had been won for the season by Phil Anslow, the other podium places were up from grabs, with Geoff Taylor, Malcolm Herbert and Mitchell Harris all racing.  After the disappointment of having to ride Malcolm’s Husqvarna the previous week in Northern Ireland, Geoff’s CZ packed up in practice. Mitchell managed to get the 350 BSA round the track to take  a maximum of 45 points on the day (something he failed to do in the Unlimited class) and thereby take 2nd place overall, with Malcolm not getting enough points, especially after the Husqvarna flooded prior to the start of race 3.  It being a British Championship day, the races were dominated by non-Welsh championship riders, with Greg Speed, Chris Collins and Steve Dent all riding strongly. 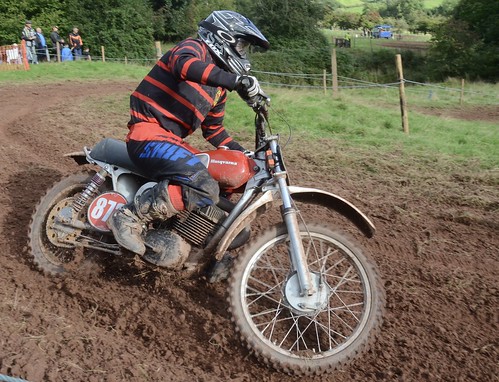 In the pre68 unlimited races, again there was a strong field initially, which dwindled down to 4 riders only in the last race. British championship regulars Tim Dallaway and Liston Bell dominated the first race, with Mitchell Harris taking the top Welsh points ahead of Nathan Jones. He wasn’t worried however as he had already got the title sorted beforehand. Mitchell then struggled with the tight, rutted right-hand corner on the next two races (which he’d done it the 350 race)  giving 30 points to Nathan. Andrew Davies on the now repaired twinport CZ rode well in races 1 and 2 and also good to Andy Watkin out there competing. 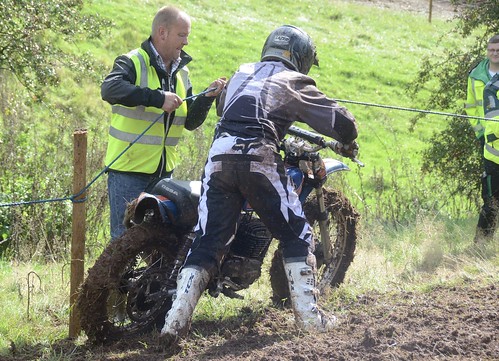 Chris Storey on Rob Hawkes’ Ossa after flying off rather impressively over the ‘whoops’ section. Was a bit confused after practice, when an Ossa flew by me and then a couple of minutes later spying a non-kitted up Rob wandering around the paddock.

Hobbling round the paddock and spectator area was nothing but pure joy for Andy Storey as he watched Honda Elsinores dominate the pre74 up to 250cc class.  His role as evil genius behind the performance of these bikes is part of what keeps the shutters up at the Pre65 and Mortimer Clubs, and with others like Chris Lewis, they’ve seen younger riders inject some excitement and great racing into the classic scene. Whilst the bikes are good, it’s also down to the riders and with the change of ECMO rules for 2017 (allowing non-reed valve pre74 bikes for 30+ and 50+ age categories) it would be good to see them against the swarm of CZ’s on the bumpy continental tracks.

Kris Winder was flying and won British and Welsh races, but even without him there, Welsh Champion Ben Weaver wasn’t having it his own way. Rhys Walker took to his uncle Dai’s Elsinore very well and finished with a win and two seconds (to Kris Winder, who was 45 seconds clear of the field). Without much competition in 2016 for Ben, it might be very different for 2017.  William Guest has ridden well on the CZ all season and battled well to get points that secured his 2nd position in the championship among the swarms of Hondas. And with a good battle between Chris Lewis and Gary Wolstenholme, it was Gary who came out best to get 3rd place in the championship. Needless to say both were riding Honda’s. 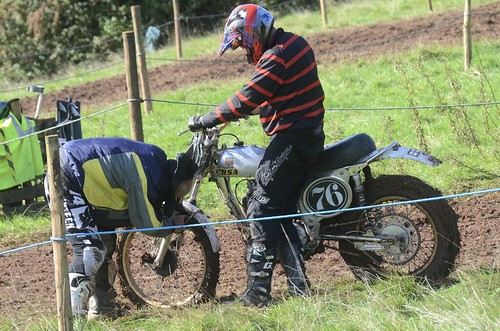 A defining moment for John Cash’s season he managed to restart the bike and get past the finish line.

For the over 250cc pre74’s as last season it was all between CZ mounted Jonathan Randall and John Cash on the BSA. John took the race 1 win ahead of Andy Stanton and Jonathan to extend his points lead, but after they came together in race 2, the CZ was quickly was restarted, but the BSA got bogged down and stuck on the sticky corner that had seen the demise of Mitchell Harris. Jonathan got maximum points, but John crossed the line to get 7 points and keep ahead in the championship.  For the final race, John took the lead on lap 2, only for Jonathan to charge past on the last two corners to claim the win, but it wasn’t quite enough to claim the championship, with John Cash winning by 3 points, 230 to 227. Exciting stuff for those watching the second two races and the closest finish to a championship class for a number of seasons.

The pre78 class was in its second season and whilst there had been an increase in riders, the demise of Alan Wood’s knee and Paul Prosser’s Cagiva and then James Edge’s Suzuki in practice meant than David Weaver had an easy finish to a championship he’d already won.  Not to say he wouldn’t have won it with the other competitors being fit as he’d showed strong form all season. James kept the second position he’d had last season with Narberth rider David Goddard taking 3rd.  With much debate online prior to the event, at which David couldn’t make, Lee Johnson failed to score enough points on his Kawasaki as failed after the second race. He went out in the 3rd combined Twinshock / Pre78 race, and score points based on the results from Track Times, but let me know straight away that he rode the ineligible 1980’s Can-Am. It meant he ended up 4th and trophy-less but its this type of honesty and approach that makes classic MX what it is. 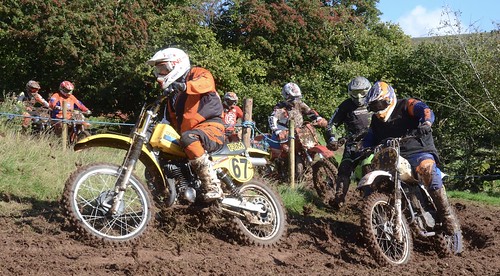 Twinshocks on the sticky corner, Anthony Guest being chased by Matt Fry.

A strong entry of Twinshocks was very much in contrast to the previous year even tough the Twinshock Nationals at Pontrilas were just up the road (they got rained off overnight on the power harrowed track, grass is best !) . The unknown winning rider is Ricky Pedder I think, who took wins over Adam Briggs after Adam had won the first race. A field of 34 bikes for the first race made for excellent racing (and even I managed my best twinshock result of 15th on the automatic Husqvarna, which then sank in race 2).

Early season form on the 250cc Maico had seen Teifiside club’s Kyle Noble take a lead over perennial 2nd place man Anthony Guest, who’d swapped the Honda 480 for an RM Suzuki this season. However, DNFs and mechanical issues had meant the poor-start to Sam Weaver’s season might not be so bad after all. All 3 were strong placed for the podium, though a resurgent Nigel Davies was riding strongly. However, despite only scoring 10 points at Llanthony, Kyle took the title from Anthony, who also managed 10 points from the one race. Sam Weaver also blew up his Maico in practice but managed to borrow a bike in pursuit of second place, but ended up 2 points short.  Kyle’s younger brother Keelan has been riding well, but the bikes haven’t been holding up and he ended up behind Nigel Davies.

Some notes to come on the sidecars.

Personally a mixed day, with the Automatic sounding a bit rough, but great to see Karl Stevens finish off his first season of his TM250 Suzuki and for a good friend and engine builder for the Yamaha TT540 give it a try out on the track. He’ll be back but for someone who rides on road and track he found it a very different experience out on a muddy track.  Also, daughter Saffron and Karl’s son Benjy both marshalled all day and enjoyed the event. Plenty of friends watching shame there was not enough time to catch up with everyone.

For the results see: http://www.classicmxwales.co.uk/standings

After taking the track down and a quick pint, headed back to Bwlch, with Tom Robinson on 6 Music playing a series of September / Autumnal tracks. He finished with the Sandy Denny / Fairport Convention track ‘Who Knows Where the Time Goes ?”, so apt for an end of season.  I was nearly in bloody tears.

Underneath the evening sky, all the riders are leaving.

Of course they know it’s time for them to go?

Ahead the winter workshop, in which I will be dreaming

I have no thought of time (or money)

(with thanks to Sandy Denny, “Who Knows Where the Time Goes”)