With the workshop repair schedule already underway, a bit of surprise to go for a ride out at Devon Classic, a late season event at Widworthy. Also, with a busy recent schedule I’d not entered and a late phone call on the Friday secured a late entry. With 25th anniversary reunion for my Poly of Wales course on the Saturday, wasn’t sure I’d even be in a fit state to race anyway.  In the end found myself waking up on a sofa in Cardiff (thanks Gray) at 06h30 with the rain hammering against the window. 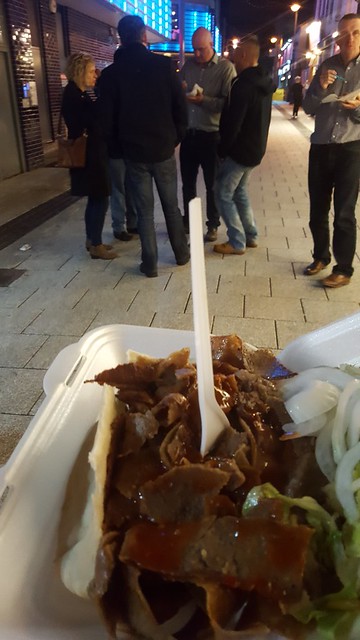 Pre race training in Cardiff on the Saturday night.

Nice and dark and damp as I walked round to the van and headed out of Cardiff and towards the M4 to the journey to Devon. Getting to the Devon tracks isn’t too bad (though getting back with the M5 traffic on Sunday evening can be more challenging) and after a quick stop for a much needed coffee I was at the track at 08h45. Paul, Dai and John turned up about 30 minutes later as the weather was brightening and though there was a cold breeze it was looking like it wasn’t going to rain. 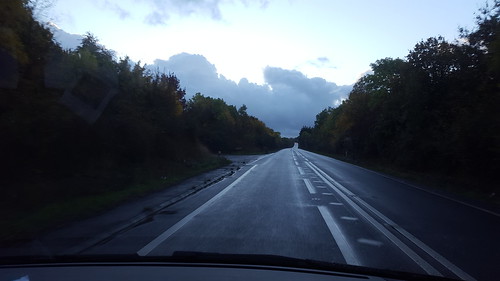 With more than one Husqvarna showing the signs of end of season attrition it was the choice between the only two bikes still running, the 1967 Hallman, which had done well in Ireland and at Llanthony and with a replaced front brake cable was back ready for the track, or the TT540 Yamaha which Roger had taken for a tentative lap at Llanthony.

A sort out in the garage on Friday had changed the front brake lever to one of the numerous Magura’s that I’d seemed to have acquired and generally gone through the bike, before loading it up prior to a relatively social day on Saturday in Pontypridd and Cardiff. No decompressor but was getting the hang of starting it; you just need a wall, van or something upright to lean against.

Feeling the after affects of a Caroline Street kebab (no ill effects from the beer surprisingly) I found myself in a field in Devon at 08h45 on a Sunday morning all ready to go. Ended up in the Twinshock D class, which given the handling of the TT wasn’t a bad place. Dai, John and Paul arrived and managed to get the Sprinter into the field, something that wasn’t too easy to achieve at the meeting back in April.

Practice was pretty well organised, and those that might have been put off by the rain the previous night, or the official tone of the entry form, would have been pleasantly surprised. Nice and sunny all day, though a bit chilly in the wind. The stubble field was pretty rutted and the TT was all over the place as I tried to work out whether I needed to get forward or back to counter the long rake at the front end. The downhill into the grass field was pretty hairy with some wobbles all the way down (and I never got confident on that all day). The up hill sections and loops were superb on the TT however, with the Roger Nunn built engine pulling well and only stuttering on full gas, hinting that the Mikuni might need a bigger main to cope with the bigger bore and the higher compression ratio (up from 8.5:1 to 11:1). Engine sounded great and managed to push the flames out of the rear. Starting sequence had been perfected even without the decompressor and the higher compression. Great stuff and the bike ran well all day.

Race 1, saw the TT getting 3rd into the first corner and holding that position until the last lap, so ended up 4th, from a field of 15 or so in Twinshock D. Though the theory of the class categories for Twinshock in the south west clubs is great, it does need policing, especially during the meeting. The Twinshock D winner was miles ahead and his time would have won Twinshock C also; the second place guy was 15 seconds a lap quicker than the 3rd place guy. At the same time, a couple of C riders should have been in D. Difficult to get right, but nice to race with your peers.

Always good to see a mix of bikes in Devon, though both the pre65 and the pre74 classes had to be combined to get a good line on the start, which points to the strength of Twinshocks in the region. Maybe they should think about a pre78 class also ? They also had an Evo class that was relatively well supported with some good riders. 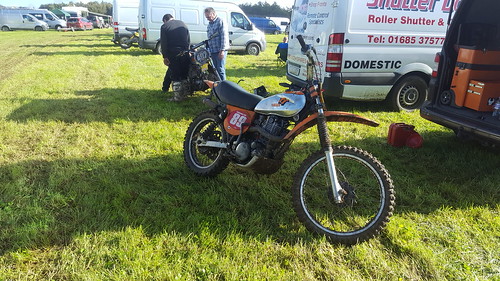 The TT Yamaha, at 540cc and the same crap front end it always had.

Race 2 was much like Race 1, with 3rd into the first corner, with a 2nd gear start and a smart shift in 3rd all that was needed to get the mighty 540 powered away. Loving this. Just the handling and the brakes that were a bit of an issue, but it was really the first time in two years I’d ridden the bike in a MX race, having only done the Gentle One hare and hounds with the old engine. Might want to look at the jetting, the rear wheel bearings and the steering head bearings as a priority. Ended up 5th, losing out to a guy on a Maico on the last lap. Loving the bike up the hills and as the ruts were becoming more pronounced so I could get the bike round the corners a bit easier. Concious also I could do more to hang the back out on the bike more and get hold of the beast by the horns. Very different from the 250cc two-stroke Husky.

Race 3 saw a better start and manage to get in 2nd behind the guy in the wrong race. And whilst managed to keep behind me down the hill on lap 1, it wasn’t the case on the other 3, and it’s where I lost places. Ended up 6th, and got 4th overall on the day, but to be fair it was Twinshock D. However great fun riding the TT, and it makes you think about what you could do to the bike. 4-strokes are fun, but not all the way to HL or JBR Honda fun. The engine is great and it was nice to have a bike you could start relatively easy (with some careful positioning).

Not the quickest bike, but great fun to ride and sorting out the front end handling will help significantly

The Devon club had obtained the services of Emma Partington on the PA (as at Llanthony) and this was extended to cover commentary. The announcements were good and you knew when to be in the pit box, but commentary (in my opinion) requires a few things:

knowing when to not talk (as well as talk); you are at the track not listening on the radio. Ritchie Benaud was the master here.

Have direct knowledge of experience on what you are talking about; yes you can do the Murray Walker bit and say what bike they are riding and where they are from, but talking about lines, racing styles etc needs experience.

Know your audience; there were very few people who’d never watched a scramble before, and it was very much teaching granny to suck eggs at times.

Emma did a good job, but it was a bit too much. In the first pre65 race, she managed to talk non-stop all the way through. Also the PA was in the paddock so 3 hours of listening to Emma, without watching the racing is a little painful. I’ve had the same experience at Abbeycwmhir, but thats got better over the last couple of years and there is a balance to be found. If between fixing bikes I’m watching the racing, its great to listening to the bikes and work it out yourself. The commentator at Ballyblack in Northern Ireland was absolutely superb and a model for anyone wanting to give it a go. Knowledgeable and a relaxed style is probably what made it.

Overall an excellent days racing, where the only fix was to a perished fuel pipe (need to find the right tap for the tank at some juncture) and apart from the tools stayed in the box. That always makes it pleasant. I also resisted the urge to do the final Twinshock C race and packed up in one piece. It might have been why I took it carefully in Race 3, but not sure.

Dai rode well, though had a lose bolt on the oil field at the start of race 2. He managed a good 3rd in the fourth race. We left before 4pm and given it was October, managed to not get too much traffic on the way back the M5. Washed the bike off and in for some dinner by 18h30 and this really is the end of the season. 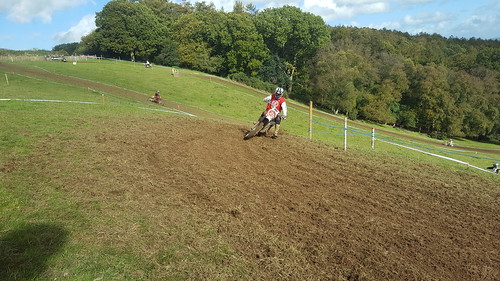 The track ended up being great, getting better as the day went on. 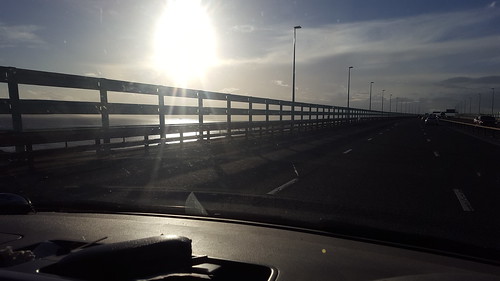 Back across the bridge and the season is now ended (again)